IF: Tell us a little about your life leading up to the creation of Orange Milk Records. How did it all begin?

KR: I co-run Orange Milk with Seth Graham, we met each other in Dayton Ohio, and I think we were both starting to get into noise and synthesizer music being released on tape around 2008 or 09. I wanted to be involved with that music somehow, and we wanted a place to showcase our own music. Throughout my life I’ve been attracted to different communities or scenes, feeling the urge to be a part of something or to associate with likeminded people, but those communities have always left me feeling alienated after a while. The beginning of Orange Milk was probably at the start of one of those urges.

IF: What is your current role in OMR? What has changed since the beginning?

KR: There’s obviously more work involved now but our roles haven’t changed very much. We switch off shipping duties every year or so, Seth is handling that right now. I do most of the visual art, and we will both talk to artists and split other duties.

IF: How do you find the artist on the label? Is there anything in particular you are looking for?

KR: I do a lot of soundcloud searching, and we get a lot of great demos. There are extremely vague parameters stylistically that we look for, it’s easier to define as an ambition or work ethic that shines through in someones work. It’s exciting to me when experimentation mixes with an inner drive, the effect is almost like someone pushing beyond their limitations, like when a singer goes just above and outside their octave range. That’s usually an interesting place to be musically. We also obviously have our whole life’s worth of experiences that have built up into a continually refined aesthetic which is constantly being transposed over the music we’re considering, like “does this fit my idea of cool?”

IF: In a recent interview you said “A lot of response to the record so far have discarded the conceptual aspects in favor of the purely musical ones, which I think is perfectly fine and justifiable – that musical reality is a deep part of the work and is by far the easiest entry point into it” What are some of these more conceptual aspects you aim to reach in your music and art?

KR: I think there’s a dual stigma with intellectualizing art and also not being conceptual enough, you’re caricaturized in either scenario. But every action anyone takes has an entire history behind it, we just choose to access that history or conceptual backing in different ways. I find making music more enjoyable when I have a conceptual world brewing behind it, and that usually starts as a vague or general philosophy. For example, I’ve been thinking about how much taste and style is determined by the culture and class systems we’re born into and how that changes a lot of ideas about individuality in the arts. That’s obviously a topic with a lot of facets, so I’ll daydream about it while recording or working. Eventually I find that the recording process, or the simple act of relying on a skill set, merges with whatever my mind has been preoccupied with, and the act of creating music starts to refine and clarify those initially cloudy ideas. It’s difficult to explain exactly, but have you ever been in emotional turmoil and then felt better after verbalizing your thoughts to someone? I think making art is like using a non-verbal language to bring a similar clarity. 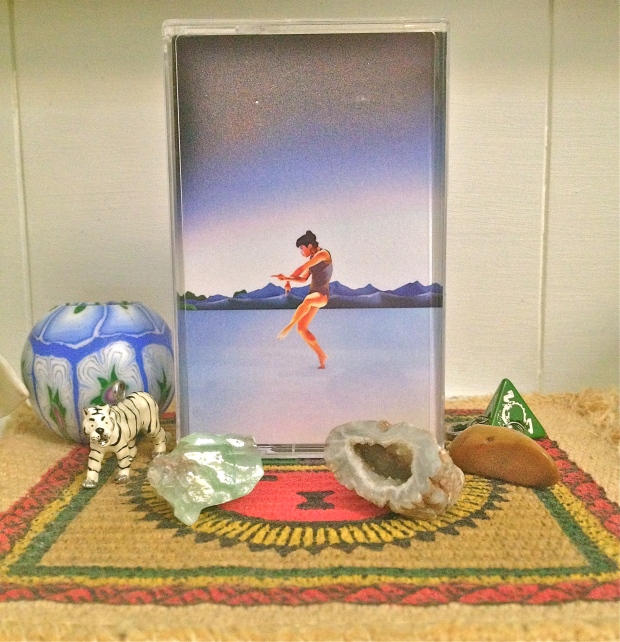 IF: We first discovered you through Kate NV. We remember seeing the album cover artwork and being pulled in before ever hearing her music. What was your process in creating this particular album artwork?

KR: Kate had wanted some more abstract, Kandinsky-like art for her cover, and we both tried pieces like that that didn’t seem to work. Actually we both liked what the other had done but didn’t like our own attempts. I remember after that sitting down and thinking “I’m gonna try to really translate this music into a visual.” I’m not as skilled with that translation when it comes to visual art, but it worked for that one, in my opinion. There’s a clearness and calmness to Kate’s NV music and also a bittersweet joy that I latched onto.

IF: What role do you believe album artwork plays in the grand scheme of things?

KR: From my experience, people seem more in tune with their visual sense than other senses, like it’s a visual interface we consciously perceive the world through. Hearing might be more in the realm of subconscious detection, there’s always a lot of sound happening that isn’t considered unless it’s disruptive or specific. That’s all to say that when visuals are paired with any of the other senses the impact can’t be underestimated. Covers dictate our perception of the music, more popular artists use their entire persona and style in that way, to express an identity and a worldview, but for many smaller artists the album cover is all there is to set the scene.

IF: You’ve mentioned the importance of growing up with the internet and also the endless rabbit hole that it can lead to. What are some of positive aspects you see in this as well as any fears you may have?

KR: The internet is creating a more global culture, which also means it will eventually erase a lot of localized culture, or at least replace them with hyper specific internet niche cultures. I’m sure that’s good for some bad for others. Personally, the net let me escape or expand the local culture I was born into, and allowed for probably my first really in depth communication with people different from me which I saw as a blessing. I don’t know, it’s a very big subject. I think the increase of accessible data is creating more malleable and expansive identities, but probably a lot of mental dissonance as a byproduct of the rapid shift. Most aspects of globalization could be seen as good or bad depending on the context.

IF: What are you doing when you’re not creating music or running a record label? Any special interest or hobbies?

KR: Going to a movie theater helps me relax, so does talking to people I know. Sometimes when I’m taking a break from music or art I’ll get on facebook, twitter, tumblr, instagram, all social media and scroll through my feed endlessly.

IF: How did you come up with the names Giant Claw and Orange Milk?

KR: Giant Claw was something I picked on a whim, I didn’t think I would continue making music under the name but that’s how it worked out. When I think about that name I start to hate it sometimes, but that happens when I think about my real name too. Maybe I’ll change it soon? Orange Milk I can’t even remember, I think I just wanted something liquid related.

IF: The year is 2059, the internet has been forbidden for 30 years and all technological progress has been halted. Where are you?

KR: In a concentration camp I guess?